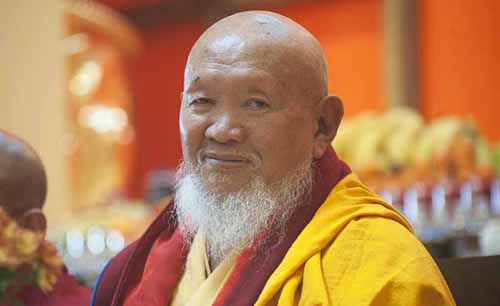 When a great master such as Lama Gangchen Rinpoche leaves His body, there are many things that we, as disciples, should do as signs of gratitude and to create the necessary causes and conditions for His swift return back among us. The only way to make these projects become reality is with support of all the Sangha. 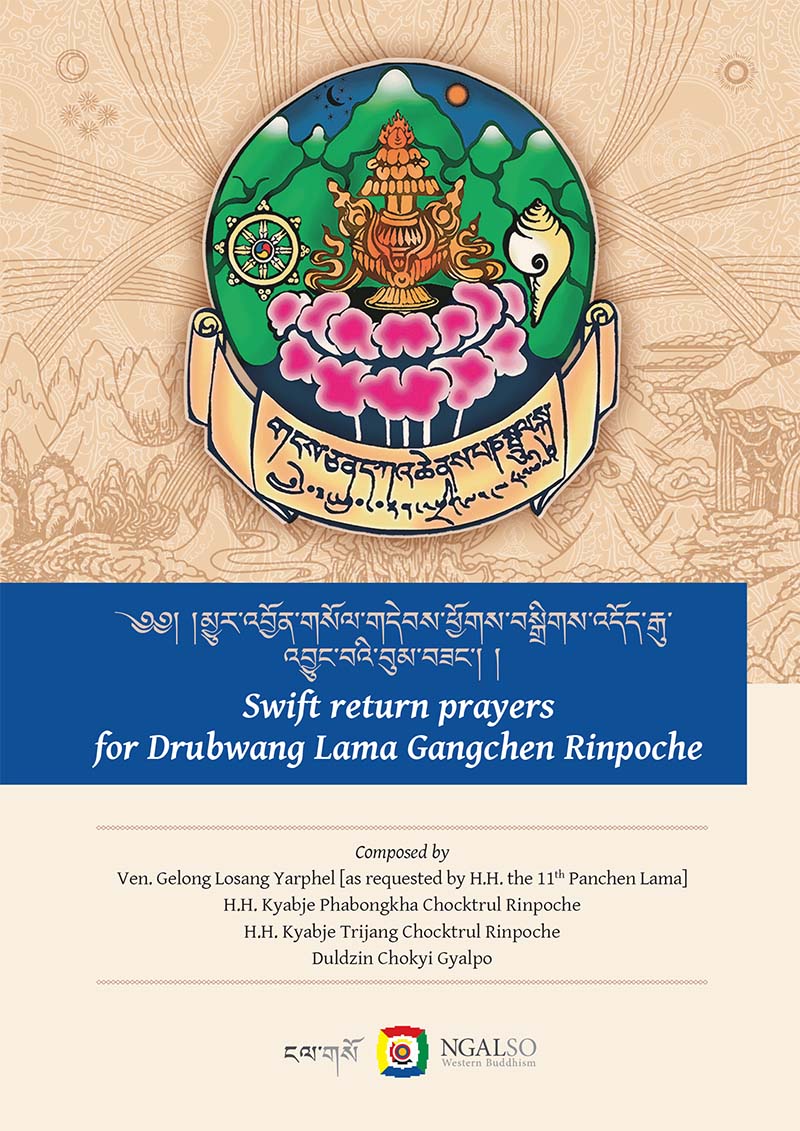 The melody of five lives as a right-turning [Dharma conch]

As per H.H. the Eleventh Panchen Lama’s request, this prayer was composed by the Vajra Master of Tsegon Namgyal Dratsang of Tashi Lhunpo Monastery in Tibet, the most venerable Gelong Losang Yarphel.
[Colofon] As Lama Michel, the Gangchen Labrang of Nepal and the loyal Monastery of Nyemo Gyache have unitedly requested the all-knowing one, our refuge and master, H.H. the Panchen Lama [to compose a prayer] for the swift return of a new incarnation of the supreme lord of refuge, Drubwang Gangchen Rinpoche after momentarily displaying dissolving into the sphere of reality. I, Ghelong Losang Yarphel, the Vajra Master of Tsegon Namgyal Dratsang, one of the five branches of the great monastic seat of Tashi Lhunpo in the region of Tsang in Tibet, with great respect have composed this prayer called “The melody of five lives as a right-turning [Dharma conch]”.

A request of infallible truth

Composed by H.H. Kyabje Phabongkha Chocktrul Rinpoche
[Colofon] As the luminary of the Gelugpa Doctrine living in Italy, the supreme Lord of Refuge, Lord of Siddhas, Drubwang Gangchen Rinpoche, the most venerable Lobsang Thubten Trinley Yarpel, has temporarily manifested the mind dissolving into the dharmakaya,

[and] just as Lama Michel Rinpoche, on behalf of the faithful disciples from many Dharma Centers, has requested me to compose a prayer for the swift return of the reincarnation of the Master of the Dharma and of sentient beings, without rhetoric, I, with the name of Phabongkha Tulku, have swiftly composed [this prayer on the 18th of April, 2020]. May it thus be realised!

Composed by H.H. Kyabje Trijang Chocktrul Rinpoche
[Colofon] As the luminary of the Gelugpa Doctrine, the incomparable Lord of Siddhas, Drubwang Gangchen Rinpoche, the most venerable Lobsang Thubten Trinley Yarpel, has passed away into parinirvāṇa, all of His disciples and students, led by Lama Michel Rinpoche, who acted as the representative of all, requested [me] to compose such a prayer for a swift return. In the same manner, the North America Gelug Buddhist Association and the Kelsang Mejung Association from Canada made such a request, offering a khata and offering. Also, the samayas of the excellent Drubwang Gangchen Rinpoche and the previous Kyabje [Trijang] Dorje Chang, the Supreme Lord of Refuge, [Guru] Vajradhara, remain to this day as milk mixed into water. On top of that, since my childhood until His old age and final passing, [He demonstrated] unchanging loving-kindness, faith and commitments towards me. So, with sadness on the 18th of April 2020, from [the Trijang Buddhist Institute in] the United States of America, I, Trijang Tenzin Lozang Yeshe Gyatso, [composed this] aspirational prayer.

A song of longing with the three faiths

Composed by Duldzin Chokyi Gyalpo
[Colofon] As the Son of the Father Guru, the luminary of the Whispered Lineage, the Excellent Lord of Siddhas, Gangchen Lobsang Thubten Thrinley Yarpel, otherwise [known as] Lama Gangchen who benefits all2, has temporarily manifested entering into the sphere of nirvana, [and] as requested by His son, known mostly as Lama Michel, together with faithful disciples from many countries and particularly, as per the wish of many monastic seats, monasteries, ordained and lay persons from Tibet, Nepal and India, and especially thanks to the connection from numerous [past] lives with Dharmapala Dorje Shugden, I, Duldzin Draggyen have accepted such requests and have composed this wishful prayer called Song of longing with the three faiths from the Ganden Khachö Tengkhang in the United States of America.
May this prayer request be realized just as we wish!

To participate, please donate to:

By PayPal or credit card
Click on the following link: http://bit.ly/swiftreturn